Music to feed the soul!

Founded in 1949 by the late Dr. Robert E. Wooten, Sr., the “Ensemble” remains the oldest community choir in the country.  Not only a pioneer in the arena of “Gospel Music”, the “Ensemble” has counted as part of its mission the preservation of Spirituals, Anthems and the Hymns of the church.  The choir, over the years, has traveled extensively throughout the United States and has ministered in hospitals, penal institutions, nursing homes and concert halls bringing the “Good News” to any that would hear.  The choir has been featured on radio, television and theatrical stage including a recent appearance in the Chicago premier of Three Mo’ Tenors.  The choir has also presented a dramatic production of its own “Wouldn’t Take Nothin’ For My Journey” which recreates the evolution of Black Music from slavery to today and from Gospel to Jazz.  The “Ensemble” now under the directorship of Robert E. Wooten, Jr. boast members currently from three generations of families!

How you can help us! 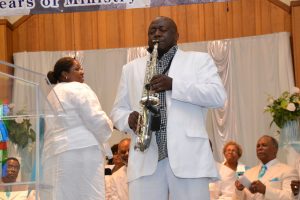